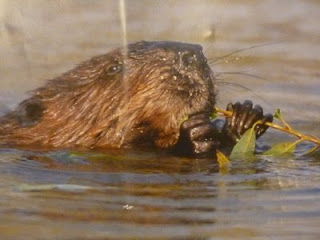 On 28 May three families of European Beavers were released on three lochs in Knapdale near Achnamara and on 29 May another family will be released on Loch Coille Bhar. According to Radio 4, 11 beavers are being released, 2 have died in quarantine and 4 are not ready to be released. According to the beaver team, 25 animals were imported from Norway with 5 dying in quarantine so we seem to have lost 3 beavers somewhere - and that is while they were in captivity.

The beavers are not contained in any way but they are radio tagged and we are assured that if they stray, they will be returned to their designated lochs. This hardly constitutes a trial of how beavers will behave in Scotland when left to their own devices. This is a fantastic area with a wonderful habitat for many wild creatures but it is far from being a wilderness area suitable for free ranging beavers with an insatiable appetite for broadleaf woodlands. It is ironic that the beavers are being encouraged to munch on our hardwoods while deer are shot for doing the same thing.

Our holiday cottages are two miles from the release sites so if you fancy a beaver safari, you know where to come.
Posted by seafieldfarm at 22:31 No comments: 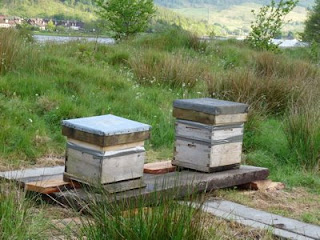 This week, Andy from the village brought a couple of his hives to Seafield. After years of thinking about keeping bees and failing to do anything about it, I now have the opportunity to try it out or at least watch while someone who knows what they are doing, gets on with it. The bee suit, gloves and hive tool are ordered. Now all we need is some fine weather, lots of flowers and hopefully the bees will thrive and produce lots of honey. We are hoping for a swarm or two which will obligingly hang about until we can catch them and of course they will be very docile, and I will not get stung - ever.
Posted by seafieldfarm at 20:33 1 comment: 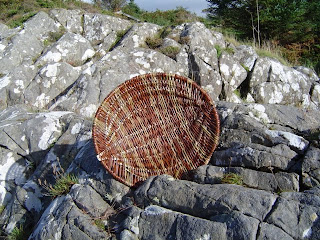 In addition to running holiday cottages, I make baskets when I have the time and the inclination. I grow various varieties of basketmaking willow and make many different styles of baskets, most of them traditional and functional but some more decorative and creative. There is a selection for sale or you can just have a look. Sometimes I run basketmaking courses for beginners and host gatherings of fellow Argyll basketmakers which usually involves a lot of chatting and a great deal of cake eating.

The willow provides a fantastic habitat for insects and birds and creates a shelter belt for the vegetable patch. It grows at a fantastic rate with the larger varieties growing up to 14 feet tall during one growing season. Willow comes in many different colours - red, green, brown, purple, yellow and orange with all shades in between.