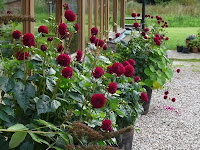 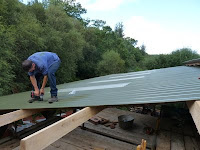 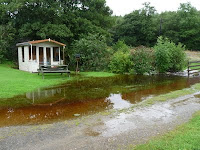 The summer of 2009 has definitely been a summer of two halves. The gloriously sunny half and the disappointingly wet and dreary half. The summer house had its own lake to look out onto when the burn came over the top of the bridge and flooded the garden for the first time in living memory. Brambles hang unpicked in the hedgerows and in the vegetable garden, the harvest is battered and waterlogged instead of golden and ripening. Visitors have been stoical in their determination to get out and about but I am sure their well deserved holidays have not lived up to expectations.

The shed roof which has dominated our summer is finished at last. It was a mammoth task in which James had help from several extremely capable and hard working Wwoofers (willing workers on organic farms). Now we have a dry space to store timber, firewood and machinery for as long as we need it. The next refurbishment in about 30 years is unlikely to be our problem.

The beavers continue to have an impact on the area. The very popular waymarked walk around Loch Coille Bharr is closed because the damming activities of the beavers which, in conjunction with a lot of rain have flooded the path. The closure signs give no indication that it is beaver activity which has caused the problem as there seems to be a policy of only putting out 'good' beaver news. The fact that only one family out of four or five families, survived the capture, transportation and quarantine regime was kept very quiet as was the information that two of the released families had been imported by the Royal Zoological Society in Scotland, a partner in the trial, three or four months before the licence for the Knapdale trial was granted. These beavers were kept in Edinburgh Zoo and Highland Wildlife Park before being released in May 2009 as part of the trial. Of the original November 2008 importation of beavers destined for Knapdale, only one beaver remains in the trial area after he was re-captured from Loch Craignish following nine weeks on the run. The adult female and female kit remain lost and unaccounted for. The beavers have been sold to the public as cute, cuddly individual animals with names and personalities but the number of beaver deaths caused by the trial has not been advertised. The current situation as far as I know, is that we have two families of three, one each on Coille Bharr and Loch Linne, one single female which may or may not be on Caol Scotnish and one single adult male on Loch Creag Mhor - unless he has gone walkabout again.
Posted by seafieldfarm at 09:56 1 comment: