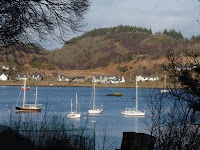 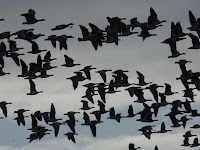 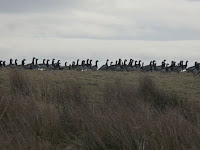 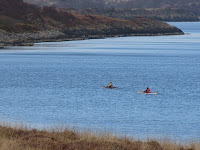 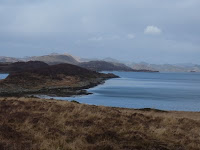 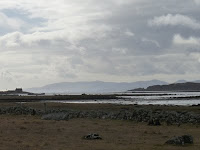 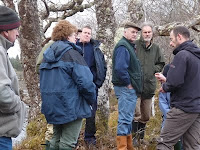 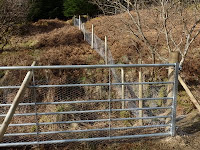 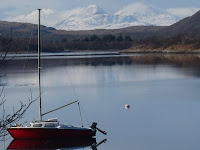 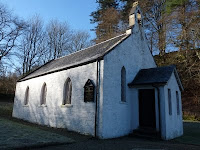 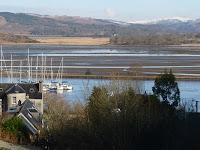 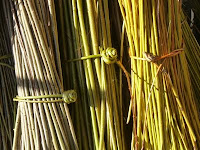 The ice has mostly gone except on higher ground and much to my amazement, the first intrepid fly fishermen of the season bagged eight trout on Loch Barnluasgan. The daffodils are still not out so maybe we will have a good show for Easter. This time last year, they were nearly over.

When you live in a beautiful place, it is all too easy to forget that there are stunning landscapes, significantly different to the wooded surrounds of Seafield, within 25 minutes drive of the house. We had a mini holiday on Saturday with a drive over to Tayvallich, a bowl of soup at the Inn, a cake from the coffee shop and a visit to Danna, an island south of Tayvallich, connected to the mainland by a causeway. The ground was unusually dry for this time of year after weeks of cold, dry winter. Hundreds of Barnacle Geese had gathered on a field but on spotting us, they took to the sky before settling again. The views were stunning and two hardy kayakers paddled along the east side of the island, heading north. Gulls were swooping and feeding over the shallow water as the tide went out. They seemed to be picking up worms from the sand. A couple of shell ducks were swimming among the gulls. We hoped to see otters but it was too cold in the breeze to spend much time sitting and watching and all we saw were otter foot prints across the muddy shore. We filled a pink bucket found on the shore with mussels for dinner.

Scottish Wildlife Trust had a beaver site visit to Loch Coille Bharr with NFU members, many of whom are concerned about the long term effects of beavers in the area. I feel rather less concerned than I was as the trial so far has not been very successful with numbers diminishing by almost 50% over the last year. The six remaining beavers are to be bolstered by the introduction of an adult male and sub adult female which are remnants of the November 2008 importation of which suffered heavy losses in quarantine and after their subsequent release. The single male adult which was taken back to the Zoo in December after being found to be in poor condition has been diagnosed with a heart condition and will not be rejoining the trial. The trial partners have applied to the Scottish Government for a further licence to import another pair of beavers from Norway. The two beavers which are arriving this month, will be on a loch close to Seafield and to prevent them getting onto our land, two fences have been constructed across the burns. So far, beavers have headed north rather than south so it is probably a complete waste of time and money. Fencing beavers in will not give a true picture of their movements in the landscape. If they stay on the Lily Loch, there should be plenty of opportunities for visitors to see them - until they flood the board walk and seat of course. Like most wildlife, humans want to look at them but they have no interest whatsoever in looking at humans.
Posted by seafieldfarm at 22:26 1 comment: