Gone are the days when I spent hours during the summer months slaving over a hot oven to fulfill cake and pudding orders for my visitors.  However, there is still always cake of some sort to welcome you on arrival.  This one has proved popular and I have had several requests for the recipe.  The version pictured is apple and rhubarb because, thanks to John and Zoe, I have lots of apples to use. 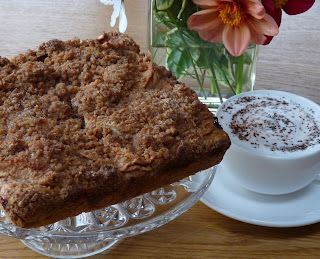 This can be made with any fruit you like - it is especially good with plums.  The rhubarb version is the one I make most because rhubarb grows well in my garden and people who claim they are not too keen on rhubarb, think that this is pretty good.  You could try cherries, peaches, gooseberries or pears too.

Base
2.5 ounces of Soft Margarine or butter
4 ounces of white or wholemeal self raising flour
1 ounce of white or brown sugar
0.5 teaspoon of ground cinnamon
1 large egg

Topping
Enough fruit to cover the base generously

Double up the ingredients.  Use a 9" baking dish or tin and cook for an hour.  It freezes well.

Posted by seafieldfarm at 12:42 No comments:

I've always loved the cost and quality advantage of home made over shop bought – or maybe that is another way of admitting to a more than healthy dose of thriftiness. If I had thought of it, reduce, re-use and recycle would have been my mantra long ago. We baby boomers have enjoyed a life of ever increasing affluence, benefiting from what we didn't realise were fantastically cheap house prices and power and a time when astonishing technological advances made an ever increasing choice of consumer durables for the home available to everyone. And yet deep, or in my case, not so deep in our psyches is the World War 2 mentality of make do and mend, dig for victory and don't throw anything away unless it is completely past it – and frequently, not even then. I have tins of string, jars of rubber bands, boxes of buttons, collections of carefully folded wrapping paper and despite a recent cull, a plastic box mountain of european proportions.
The Green movement suited me down to the ground. A way of spending less and being lauded for my environmental concerns rather than castigated for my meanness. The light bulbs were changed for low energy, never mind that in our less than tropically heated house they take some time to give more than a dim glow and fail to fulfill their promise of long life. The loft is heavy with insulation, the windows are double glazed and woolly jumpers are de rigeur when the temperatures drop.
In 2007, being ever more concerned by the rapidly rising cost of LPG to run our central heating and a boiler which was starting to make strange noises, we decided to install a log fired boiler to provide heating for the house, cottages and workshop. Surrounded by trees on our own land and Knapdale Forest, free logs rather than costly chips or pellets seemed the way forward. Offcuts from the sawmill add to the stocks so rather than hand over vast amounts of money, we have taken on vast amounts of work to supply the fire monster in the boiler house. Our dismay when, in a bid to deal with overheating, visitors ignore the thermostats in preference for open windows and jumper removal, is now motivated by the work rather than the cost of providing the heat. We may not do it all with a hand axe and bow saw but it still requires effort which we would rather use in the pursuit of keeping cottages cosy, than in the impossible task of warming the whole of Argyll.
Now we have joined the ranks of the Kilowatt Bores. The hot topic at dinner parties (if we ever get invited to any) will not be the state of the economy or house prices but how many kilowatts we have generated from our photo voltaic solar panels. Our lovely slate roof has been partially covered with fifteen shiny panels which, in theory, with unbroken sunshine shining at exactly the right angle, could generate 3.75 kilowatts of electricity per hour. We could have had the full 4 kw with sixteen panels but that would have left one panel on its own and aesthetics won over maximum generating potential. My new hobby will be attempting to use as much of the power generated to maximise the savings on the electricity bill as well as gaining from the feed in tariff. Sadly this will mean slaving over a hot oven, hoovering or doing the ironing whenever the sun is shining – or maybe not.
Earth Fuel Scotland installed the panels and did a great job. It would be nice to be able to say that the sun came out as soon as we were plugged into the grid but instead, the panels got well soaked by a rain shower. But even during the late afternoon, post rain gloom, the meter stopped turning and for a short while before darkness set in, at least some of the power going into the fridge and freezer was home grown.

And the forecast for this week? Showers and rain giving way to torrential downpours. It might be a while before our investment pays for itself.  In the meantime, I'll keep saving string.